The stepper motor is a digital input-output device. It is particularly well suited to the type of application where control signals appear as digital pulses rather than analog voltages. One digital pulse to a stepper motor drive or translator causes the motor to increment one precise angle of motion. As the digital pulses increase in frequency, the step movement changes into continuous rotation.

How does a stepper motor work?

Every revolution of the stepper motor is divided into a discrete number of steps, in many cases 200 steps, and the motor must be sent a separate pulse for each step. The stepper motor can only take one step at a time and each step is the same size.

Since each pulse causes the motor to rotate a precise angle, typically 1.8°, the motor's position can be controlled without any feedback mechanism. As the digital pulses increase in frequency, the step movement changes into continuous rotation, with the speed of rotation directly proportional to the frequency of the pulses.

Stepper motors are used every day in both industrial and commercial applications because of their low cost, high reliability, high torque at low speeds and a simple, rugged construction that operates in almost any environment. 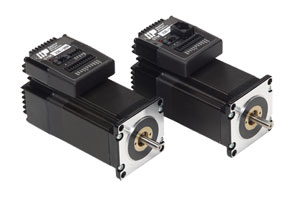 Choosing a Stepper Motor and the controller

The choice of a stepper motor depends on the application's torque and speed requirements. Use the motor's torque-speed curve (found in each drive's specifications) to select a motor that will do the job.

The recommended motor list is based on extensive testing by the manufacturer to ensure optimal performance of the stepper motor and controller combination.

Choose the right stepper motor for your application

Step and Direction
These drives accept step pulses and direction/enable signals from a stepper motor controller, such as a PLC or PC. Each step pulse causes the motor to rotate a precise angle, with the frequency of the pulses determining the speed of rotation. The direction signal determines the direction of rotation (CW or CCW), while the enable signal turns the motor on or off.

Oscillator
Stepper motor drives with a built-in digital oscillator accept an analog input or joystick for speed control. These systems are generally used in applications requiring continuous motion rather than position control, such as mixers, blenders, and dispensers.

Stand-Alone Programmable
All of these stepper motor controllers can be programmed for stand-alone operation; the motion control program is created with a simple drag-and-drop high-level software interface (included free), then downloaded and executed upon power-up. The motion control program typically waits for an input such as a switch closure or button press before executing the programmed motion.

There are three basic types of stepper motors:
These are brushless electrical machines which rotate in fixed angular increments when connected to a sequentially switched DC current. When alternating current is used, the rotation is essentially continuous.

As in the one-phase-on energizing scheme, the shaft completes one revolution for each complete revolution of the electromagnetic field. It should be evident that this motor can half step; i.e., step in small step increments. This is possible by combining the energization shown in Figure 1 with that shown in Figure 2. Figure 3 shows the diagrams of a PM stepper motor with half-step rotor motion.

As in the previous diagrams, the rotor and shaft move through the same angle as the field. Note that each step resulted in a 45° rotation instead of 90° in the previous diagram. A permanent magnet stepper motor may be wound with a bifilar winding to avoid the necessity of reversing the polarity of the winding. Figure 4 shows the bifilar winding while Table IV shows the energization sequence.

Bifilar windings are easier to switch using a transistor controller. Fewer switching transistors are required. b.) Stamped or can stack permanent magnet stepper motor. The most popular type of permanent magnet stepper motor is the so called stamped type, claw tooth, sheet metal, tin can or simply low cost motor. This motor is difficult to illustrate clearly because of the way it is constructed.

This motor has a pair of coils surrounding a permanent magnet rotor. The coils are enclosed in a soft iron housing with teeth on the inside reacting with the rotor. Each coil housing has the same number of teeth as the number of rotor poles. The housings are radially offset from each other by one-half the tooth pitch.

This type of stepper motor has an electromagnetic stator with a magnetically soft iron rotor having teeth and slots similar to the rotor of an inductor alternator. Whereas PM motors are basically 2-phase machines, VR motors require at least 3 phases. Most VR stepper motors have 3 or 4 phases although 5-phase VR motors are available.

In a VR stepper motor, the field moves at a different rate than the rotor.

Note that Phase A coil has two south poles and no north poles for a flux return path. You may rest assured that there will be one. The flux will return through the path of least reluctance, namely through the pole pairs which are nearest to two rotor teeth. This varies with rotor position. The flux induces a voltage in the coils wound on the pole. This induces a current in the winding slowing the rotor. The amount of current is determined by the voltage across the coil. A diode-clamped coil will have more current than a resistor diode or zener diode-clamped winding.

This type of motor is frequently referred to as a permanent magnet motor. It uses a combination of permanent magnet and variable reluctance structure. Its construction is similar to that of an induction motor.

The rotor has two end pieces (yokes) with salient poles equally spaced but radially offset from each other by one-half tooth pitch. A circular permanent magnet separates them. The yokes have essentially uniform flux of opposite polarity. The stator is formed from laminated steel. Some motors have 4 coils arranged in two groups of 2 coils in series. One coil pair is called Phase A and the other Phase B.

The number of full steps per revolution may be determined from the following formula: 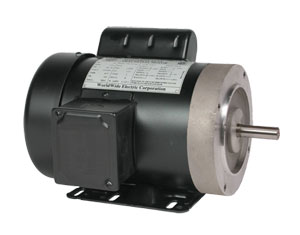 Where: SPR = number of steps per revolution

NR = total number of rotor teeth (total for both yokes)

They are constructed with multi-toothed stator poles and a permanent magnet rotor. Standard hybrid motors have 200 rotor teeth and rotate at 1.8º step angles. Because they exhibit high static and dynamic torque and run at very high step rates, hybrid stepper motors are used in a wide variety of commercial applications including computer disk drives, printers/plotters, and CD players.

Standard hybrid stepping motors have 200 rotor teeth, or 200 full steps per revolution of the motor shaft. Dividing the 200 steps into the 360° of rotation equals a 1.8° full step angle. Normally, full step mode is achieved by energizing both windings while reversing the current alternately. Essentially one digital pulse from the driver is equivalent to one step. 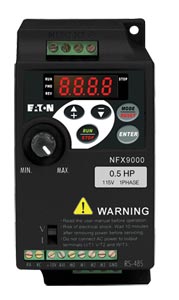 Half step simply means that the stepper motor is rotating at 400 steps per revolution. In this mode, one winding is energized and then two windings are energized alternately, causing the rotor to rotate at half the distance, or 0.9°. Although it provides approximately 30% less torque, half-step mode produces a smoother motion than full-step mode.

Microstepping is a relatively new stepper motor technology that controls the current in the motor winding to a degree that further subdivides the number of positions between poles.

Omegamation microstepping drives are capable of dividing a full step (1.8°) into 256 microsteps, resulting in 51,200 steps per revolution (.007°/step). Microstepping is typically used in applications that require accurate positioning and smoother motion over a wide range of speeds. Like the half-step mode, microstepping provides approximately 30% less torque than full-step mode.

The rotary motion of a stepper motor can be converted to linear motion using a lead screw/worm gear drive system (See figure B). The lead, or pitch, of the lead screw is the linear distance traveled for one revolution of the screw. If the lead is equal to one inch per revolution, and there are 200 full steps per revolution, then the resolution of the lead screw system is 0.005 inches per step. Even finer resolution is possible by using the stepper motor/drive system in microstepping mode.

There are two ways to connect a stepper motor, in series or in parallel. A series connection provides a high inductance and therefore greater torque at low speeds. A parallel connection will lower the inductance which results in increased torque at faster speeds.

The driver receives step and direction signals from the indexer or stepper motor controller and converts them into electrical signals to run the stepper motor. One pulse is required for every step of the motor shaft.

In full step mode, with a standard 200-stepper motor, 200 step pulses are required to complete one revolution. The speed of rotation is directly proportional to the pulse frequency. Some control systems have an on-board oscillator which allows the use of an external analog signal or joystick to set the motor speed.

Speed and torque performance of the stepper motor is based on the flow of current from the driver to the motor winding. The factor that inhibits the flow, or limits the time it takes for the current to energize the winding, is known as inductance. The effects of inductance, most types of control circuits are designed to supply a greater amount of voltage than the motor's rated voltage.

The indexer, or stepper motor controller, provides step and direction outputs to the driver. Most applications require that the indexer manage other control functions as well, including acceleration, deceleration, steps per second and distance. The indexer can also interface to and control many other external signals.

Communication to the control system is through an RS-232 serial port and in some cases an RS485 port. In either case, the stepper motor controller is capable of receiving high-level commands from a host computer and generating the necessary step and direction pulses to the driver.

The controller includes auxiliary I/O for monitoring inputs from external sources such as a Go, Jog, Home or Limit switch. It can also initiate other machine functions through the I/O output pins.

In a stand-alone mode the controller can operate independent of the host computer. Once downloaded to the non-volatile memory, motion programs can be initiated from various types of operator interfaces, such as a keypad or touchscreen, or from a switch through the auxiliary I/O inputs. 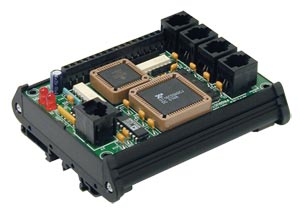