When the need arises for measuring temperatures in various industrial situations, most engineers think in terms of expensive electronic temperature measuring equipment. In many cases, though, you can do the job with less costly and much simpler methods. When the need is only for an indication that a pre-determined temperature has or has not been reached, heat-sensitive materials in the form of crayons, paints, pellets, or labels can do the job readily, inexpensively, and accurately enough for most industrial applications.

These heat-sensitive, fusible materials consist of crystalline solids. When heated, a temperature will be reached in which the solids change sharply to a liquid. The melting point is reproducible and is virtually unaffected by ambient conditions that may cause errors with other temperature-sensing methods. For example, electrical means of measuring temperatures often function erratically in the presence of static electricity, electrical “noise” or ionized air near electrical equipment. 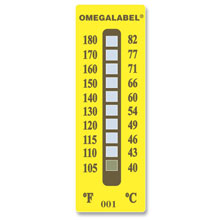 Another variation of the phase-change indicators is the temperature sensitive label. These adhesive backed monitors consist of one or more heat sensitive indicators sealed under transparent, heat-resistant windows. The centers of these indicators turn from white to black at the temperature ratings as shown on the label face. This color change, caused by the temperature-sensitive substance being absorbed into its backing material, is irreversible. After registering the temperature history of the workpiece, the exposed monitor label can then be removed and affixed to a service report to remain part of a permanent record.

Using the crayons is simple. The workpiece to be tested is marked with a crayon. When the pre-determined melting point of the crayon mark is attained, the mark instantly liquifies, notifying the observer that the workpiece has reached that temperature.

However, under some circumstances, premarking with a crayon is not practical. This can be the case if a prolonged heating period is involved (the crayon mark may evaporate), if the surface is highly polished and does not readily accept a crayon mark, or if the material being marked is such that it absorbs the liquid phase of the crayon. In such instances, the operator can repeatedly stroke the workpiece with the crayon. The point at which the surface reaches the desired temperature is determined by noting when the crayon ceases to make dry marks and instead leaves a liquid smear. 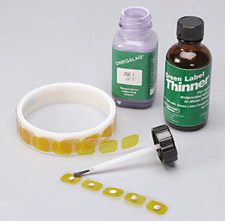 Another form of heat sensitive material is a dull lacquer-type liquid that turns glossy and transparent at a predetermined temperature. This phase changing liquid is a fusible coating material that offers greater flexibility than crayons as to the types of surfaces on which it can be applied.

Chemically, this lacquer-type fluid contains a solid material that has a calibrated melting point. These solids are suspended in an inert, volatile, but nonflammable vehicle. Upon reaching its rated temperature, the dull lacquer mark liquifies. On subsequent cooling, however, the fluid does not revert to its original dull appearance, but rather to a glossy or crystalline coating. This shiny state of appearance is evidence that the lacquer has reached the rated temperature.

The temperature-sensitive lacquers are supplied in the proper consistency for brushing. If spraying or dipping is preferred, a special thinner is added to alter the viscosity without impairing the temperature indicating performance.

The first commercial form of the fusible indicator was the pellet, which continues to be useful in certain applications. Pellets are most frequently employed when extended heating periods are involved or when oxidation of a metal workpiece might obscure a crayon mark. Pellets are also ideal when a relatively large bulk of indicator material is necessary because observations must be made from a distance. Another major use of pellet-type indicators is for determining specific air-space temperatures. A typical application is the monitoring of heat zones in industrial ovens and furnaces.

Phase change temperature indicating pellets are available in flat tablets, 7/16” in diameter and 1/8” thick. For special applications, smaller 1/8” by 1/8” thick pellets are also available. One application for these miniature pellets is that of thermal fuses. The solid pellet acts as a circuit breaker as it melts and releases tension on a spring which, in relaxing, opens a contact, in turn, cutting off electrical continuity.

Pellets come in the extended range from 100°F to 3000°F. For temperature measurements in hydrogen, carbon monoxide, or other reducing environments, a special series of pellets is also available.

Reversible temperature sticker
Reversible liquid crystal sensor labels change appearance once a certain temperature is reached and can be used over and over.

Non-reversible temperarture sticker
Irreversible sensor labels change appearance once a certain temperature is reached. These can be handy when one needs confirmation that the temperature of a piece of equipment or a material has not exceeded a certain level.

A second advantage of using fusible temperature indicators is the fact that there is no delay in obtaining a signal. Since a mark left by a crayon or a lacquer has an extremely small mass, it attains rapid equilibrium with the surface. The use of a “massive” probe tends to prolong response time and could result in an erroneously low reading. With the use of fusible temperature indicators, there is no conduction of heat away from the surface. Nor is there any dependence on the duration of heating.

What is the difference between Non-Reversible and Reversible Temperature stickers?

What are Non-Reversible Temperature labels?